As planning efforts are underway to rebuild Tyndall AFB, the process of mapping the installation’s features in its current state—post-hurricane and pre-restoration—are shaping its future state. Analyzing the the pre-storm conditions and hurricane impacts lends a solid foundation for a data-driven, informed, and resilient installation design. 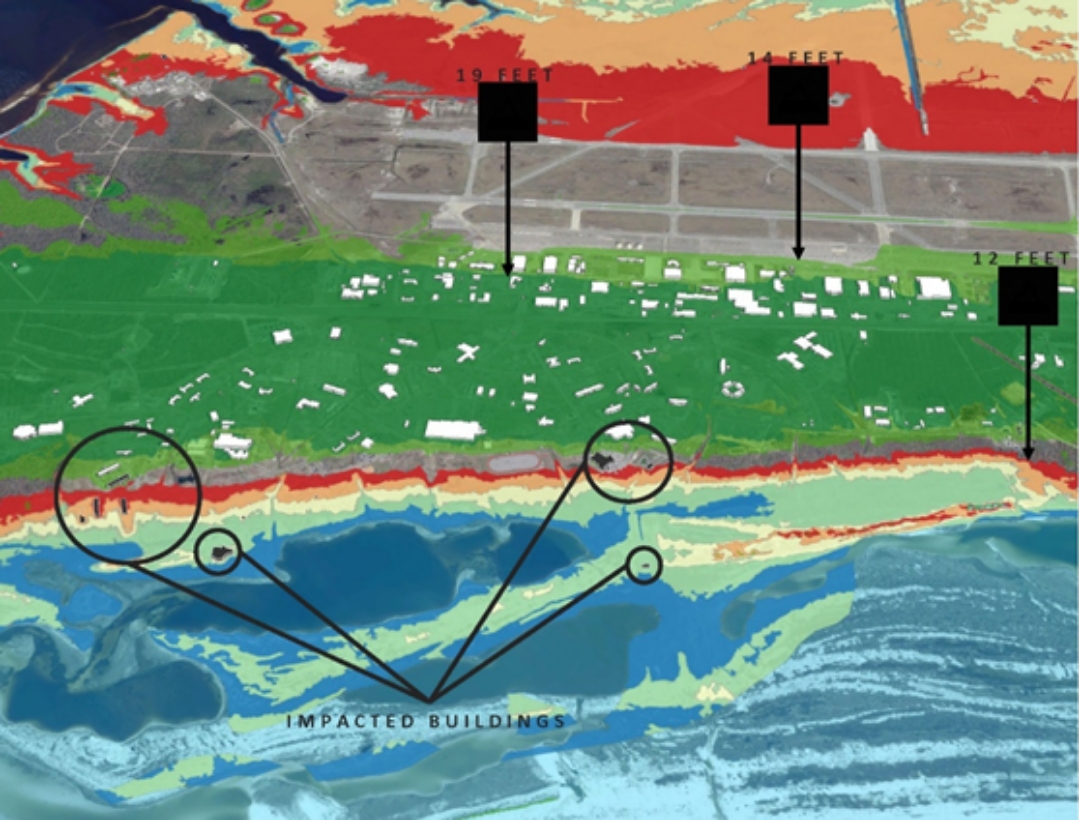 On 10 October 2018, Tyndall AFB was hit by Category 5 Hurricane Michael, the strongest sustained wind‐speed hurricane to hit the continental U.S. in more than 25 years. Originally classified as a Category 4, the National Weather Service upgraded the hurricane after the damage had been surveyed. Before the storm hit, 3,600 installation personnel and their families (more than 11,000 people) were evacuated – just 93 personnel remained on Tyndall AFB during the storm. 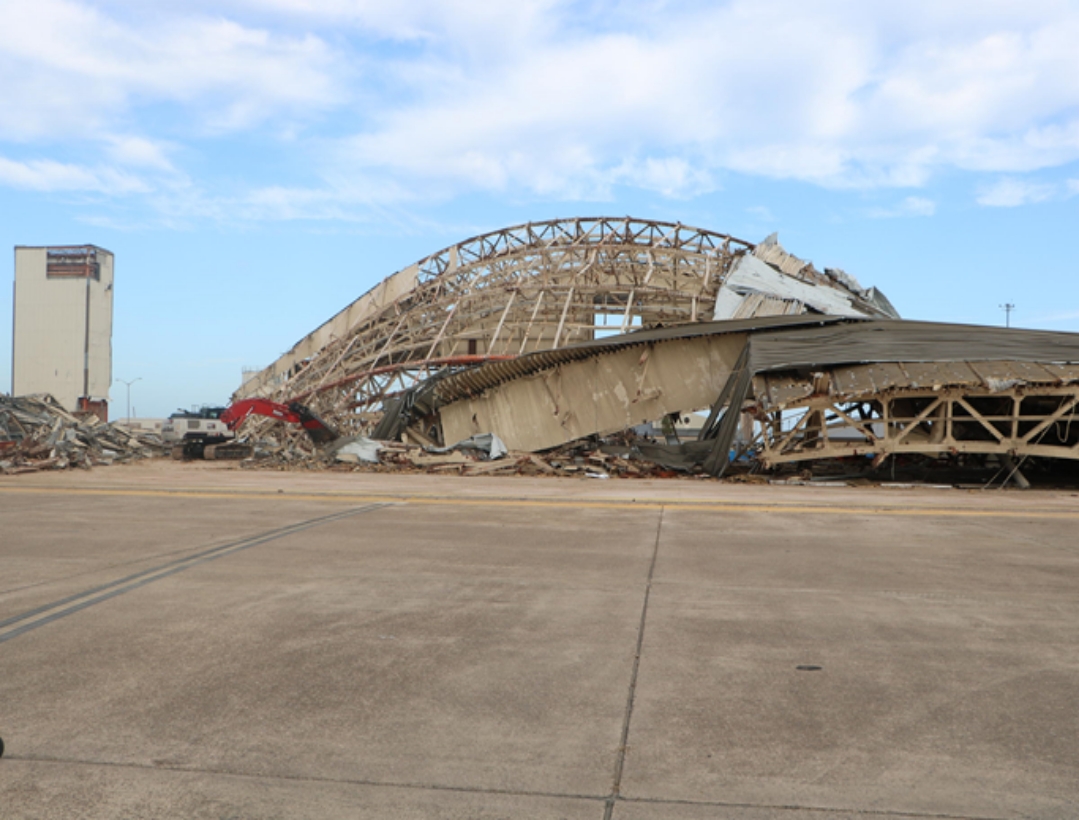 Every Tyndall AFB facility suffered some degree of damage from Hurricane Michael’s severe winds, storm surge, and heavy rainfall. Recently built structures, historical facilities, and infrastructure, including utilities, roads, and pavement, were impacted. For example, Hangar 5, pictured above, was built during World War II. The extent of the damage on more than 200 buildings rendered them unsalvageable from an economic standpoint. Before the hurricane, the airfield supported multiple missions for both U.S. armed forces and foreign military forces, in addition to supporting the 325th Fighter Wing (325th FW) mission. 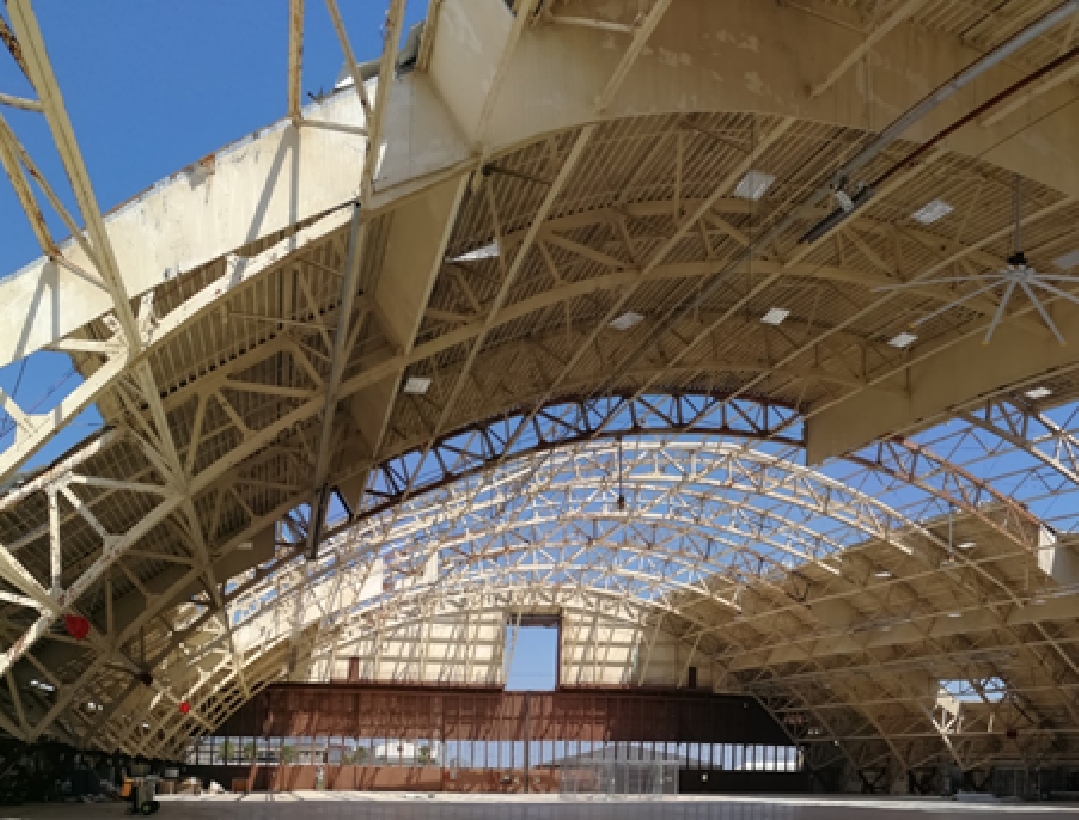 Shortly after Hurricane Michael, multiple task forces were assembled to assist the 325th FW facilitate the installation’s recovery. Task forces were directed to assess damage to installation facilities and infrastructure, determine asset usability, and preserve future mission capability. Because of extensive hurricane damage, Tyndall AFB has an opportunity to implement several long-range planning objectives from its Installation Development Plan and its 21st Century Installation Concepts. The rebuilding of Tyndall AFB is underway, with initial planning to fund major investments moving forward. Several existing missions will continue, while others will move to different locations. 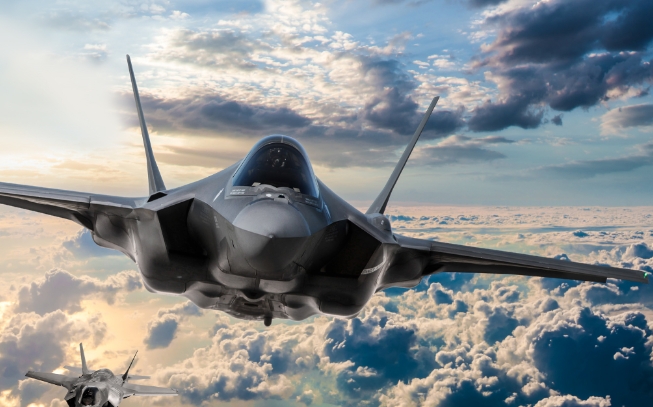 Tyndall AFB’s vision as an Installation of the Future

Planning for the Future Today

Collaboration among subject matter experts, utility design teams, USAF, and Tyndall AFB stakeholders produced utility and infrastructure concepts organized into performance categories of Baseline, Better, and Best. The process was guided by the “5 Rs” Energy Resilience framework used by the Deputy Assistant Secretary of the Air Force for Environment, Safety and Infrastructure. The framework is based on the definition of resilience as the “ability to prepare for and recover from disruptions that impact mission assurance.” Each aspect of the 5 Rs framework includes management systems, training, emergency response planning, external partnerships, and other procedures to achieve the intended resilience performance objectives.

This aspect focuses on the extent to which a system can absorb an impact or prevent the impact from spreading to other parts of the system.

This aspect focuses on the extent to which a system has excess capacity or a diversity of methods in which it can continue to provide the required level of service. Multiple sources of energy, microgrids, expanded fuel storage, and backup water supplies are good examples of concepts that provide redundancy.

This aspect focuses on the extent to which a system can adapt when impacted during a risk event and the speed with which it adapts.

Both response and recovery aspects focus on the ability to activate systems during a risk event that mitigate impacts and enable systems to return quickly to a defined requisite level of operation.

Both recovery and response aspects focus on the ability to activate systems during a risk event that mitigate impacts and enable systems to return quickly to a defined requisite level of operation.
Guiding Principles

Creating the Installation of the Future

Rebuilding Tyndall AFB offers an opportunity to design and construct the Installation of the Future. Initial planning is underway to determine how best to approach this massive undertaking. In November 2018, it was determined that several existing missions would endure, a new F-35 mission would be added, and other missions would move, framing the majority of the future mission requirements for Tyndall AFB. The rebuilding effort must incorporate planning and design strategies that support operational readiness and efficiency; create a secure, resilient environment; address flood and storm surge risks; and consolidate development to use land efficiently. A consolidated development will support the creation of a walkable community with a sense of place that is more cost-effective with regard to infrastructure and lifecycle costs. Some of the development strategies that should be used in the re-imagining of Tyndall AFB are listed below.

Provide assets that support the long-term goals of the Air Force and mission to readiness.

Use land assets strategically and incorporate market considerations to create value for the community and overall Florida panhandle.

Incorporate the latest proven technologies to support proactive asset management to create a smart and connected base.

Provide a compact development that creates a sense of place, encourages walking, and limits the amount of infrastructure required.

Protect the natural assets to support a resilient, enduring base.

A Recovery Plan and Analysis of Alternatives Report was submitted in Spring 2019. The document contains an illustrative Master Plan (as shown below) serving as a launching point and guidance for site planning and DD 1391 Program efforts. 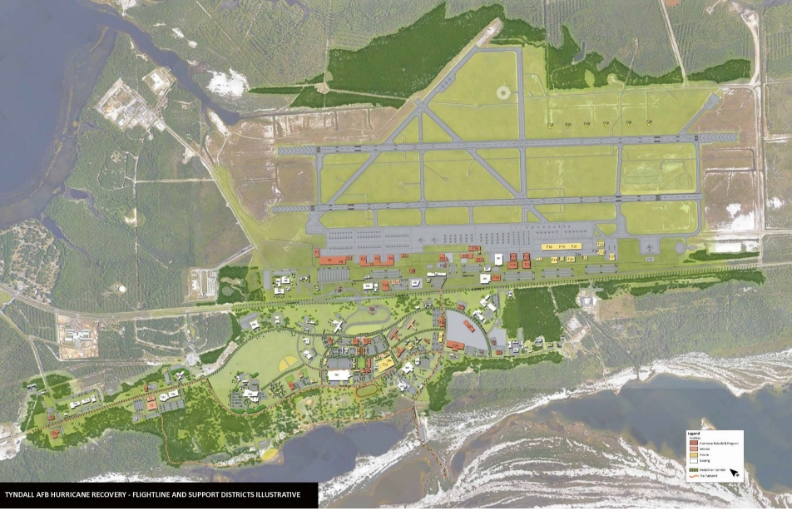 Updated USAF policy and planning documents, such as the Design Flood Elevation and Wind Speed memorandums, were reviewed to identify design criteria and/or concepts to achieve the desired level of resilience and sustainability performance. Available data regarding hurricane intensity, storm surge, flooding, and sea level rise were also reviewed.

A network of subject matter experts was engaged to identify an array of resilience and sustainability concepts. Prioritization required engagement and alignment with a range of Tyndall AFB personnel and USAF departments. The current Master Plan was used as the base map for the effort.

The DD 1391 funding requests incorporated resilience and sustainability requirements in the project descriptions and cost estimates.

Through the use of various opportunities we will create a better connected base of the future, at the same time, a focus on sustainability, resiliency, and environmental,
Tyndall will be positioned for years to come to adapt and withstand the challenges of the future.

To facilitate the progression of the built environment from its current state to its desired end state, the team assembled data from the building surveys and the Master Plan. Every building that needed to be replaced must go through the approval process sanctioned by Congress. Therefore, a complete inventory of demolition projects was compiled to determine what facilities would need to be replaced. The decision matrices used to inform this list compilation are explained in Design Intent. Three demolition categories were identified to bring the current site layout to the end state, including those buildings that have already been demolished, those that are scheduled for demolition due to damage, and buildings that will be demolished to facilitate the arrangement of the Master Plan.

Proposed buildings submitted for approval and funding during fiscal years 2019 and 2020 totaled more than 2.3 million square feet. Nearly 8 miles of roadways, complete pedestrian/bicycle network, major utility backbone, and three entry control facilities were included to support these buildings. Each project was presented in DD 1391 format that detailed the typology, program, size, orientation, site plan, and cost estimate, including 10% architectural design cost. These projects were comprised of mission-dependent facilities and were sited with reference to the Master Plan. The orientation, infrastructure, and cost estimates incorporated the strategies for sustainability and resiliency as they had been identified and prioritized through the development process.